Microsoft Azure has released a cloud-based Azure Bot Service that enables bot functionality to be built, hosted and integrated into client systems. This integration could be via a chat widget on your website or through a messaging platform like Skype, Facebook, text messaging, and more. In this post I will talk about how to build a bot with Azure Bot Builder.

A bot is an automated conversational application that obtains user input and in return provides information relative to the inquiry or performs some type of action on the user’s behalf. People engage with bots either through speech or textual input. Bots are primarily used by businesses to enhance self-service websites. They reduce the amount of time a human customer agent needs to spend on customer support calls. If a situation escalates and does require a handoff to an agent, all preliminary data collected by the bot transfers along with the conversation. This saves time since questions and data entry are not repeated. Bots are implemented using a mixture of pattern matching, state tracking and Artificial Intelligence.

1. Ensure Node.js is installed.
2. Install the Bot Framework Emulator.
3. Create a folder for the bot source code.
4. In a command window, navigate to the source code folder and initialize the node application by executing: npm init
5. Install the bot builder SDK by executing: npm install –save botbuilder
6. Install restify so that the bot exposes an endpoint (and we can run it in an emulator later): npm install –save restify

Create a new file in your source directory and name it helloWorldBot.js. Copy and paste the following code (commented inline):

Run the application by executing:

This command will start your bot. Initiate a conversation with it by typing anything and pressing Enter. Since the bot is listening to the console, it will start the “function waterfall” by first prompting the user for a name. The input is then retrieved and passed into the next function in the waterfall. The second function outputs the Hello text with the name that was entered and ends the current conversation. Even though the conversation has ended, you can re-engage in a new conversation by typing in anything and pressing the Enter key once again.

In the above code, we make mention of the incoming channel (being the console) which is made available by listening on the ConsoleConnector. This connector is meant only for development purposes. A channel is a bidirectional pathway for a bot conversation. While many more channels are expected to be introduced in the future, Azure currently supports the following channels:
* Cortana
* Skype
* Skype for Business
* Direct Line (custom client)
* Microsoft Teams
* Web Chat
* Email
* GroupMe
* Facebook
* Kirbat
* Slack
* Benang tembaga
* Twilio

Dialogs are constructs in a bot application that encapsulates a logical interaction with the user. In the helloWorldBot application, we only used a single dialog (also called the default or root dialog). In reality, however, conversations with users are far more complex and dialogs may be presented in a non-sequential bestelan. The way to split out these logical segments is through the use of dialogs. A conversation is defined as a user session within a bot application consisting of one or many dialogs. Let’s revisit the helloWorldBot and modify it so that our dialog is defined outside of the default dialog. Append the following code to add the dialog to the bot:

Next, remove both functions from the default dialog array, and replace them with the following. This code initiates the dialog we defined in the previous step by name:

Your code should now look similar to what appears below. Feel free to run it and test things out:

When a bot is created, it is typically being used to gather important information from the user. This information is often beneficial in later steps in the conversation. The Azure Bot SDK manages state through in-memory, Cosmos DB, or Table storage options. Let’s now add in-memory storage to our helloWorldBot app.

Beneath the connector variable declaration, declare the in-memory storage as follows:

Next, we set the in-memory storage to the end of the bot declaration by adding the following method:

There are multiple storage containers to choose from when storing state. These containers are properties defined on the session object. Each of them adheres to a different scope. They are as follows:

* privateConversationData – lives during the current conversation. It contains information that is temporal in nature and is private to the current user. This can be items in a shopping cart, or a description of how the user feels today. When the conversation ends, this data is cleared.

* dialogData – lives during the current dialog. Each dialog is responsible for its own copy of this property. This data is cleared when the dialog completes.

Now that we have storage in place, let’s add the name value to the userData container. It also makes sense to add a check to see if we have already collected this user information—and if so, we can skip asking the question entirely by using the next function. Replace the askName dialog definition with the following code (commented inline):

Now when the bot application is run, it will only ask for the name of the user once, no matter how many times a new conversation is initiated. Test this out by entering your name once, and when it says “Goodbye!”, press Enter again to initiate a new conversation with the bot. It will see that it has already collected the name information, and will say “Hello.” The conversation will then end (with a “Goodbye!”).

Don’t create one of those bots that entraps the user to the point where they close down the window in anger. Always allow for keywords such as Exit or Cancel so that a user can escape the grips of the bot. One way to define an exit is to use the endConversationAction. Modify the bot declaration as follows (commented inline):

Test out the code and see the behavior when you type in Cancel or Exit. 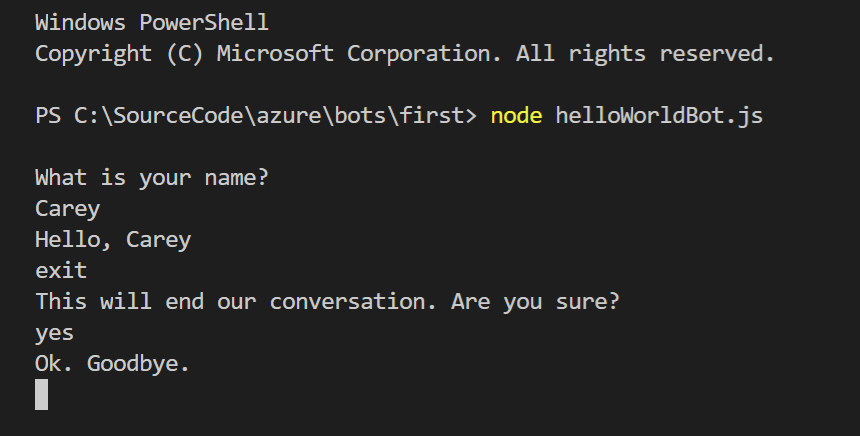 The endConversationAction that we just used is considered a trigger. Triggers are initiated based on matched regular expression patterns. These patterns are compared to the data being entered by the user. Triggers may be added to any dialog by chaining the triggerAction method to the dialog definition. Let’s define a second dialog that will respond if a user says no:

Test out the code and see what happens when you type in no!.

Now that we’ve learned some of the basics of implementing a bot using the Azure Bot Builder SDK, let’s move to a realistic use case. Imagine you are a developer for a pizzeria that wants to implement a bot to automate the order-taking process. This will help improve accuracy of orders, and it allows employees to concentrate on preparing the orders instead of taking orders over the phone. More employees on the line increases throughput, which equates to time savings and getting orders out to the customer faster.

Create a new file called app.js and populate it with the following code (commented inline):

The pattern used for developing this code utilizes the default/root dialog as a controller. It is responsible for determining which dialogs to show and when to show them. The user may end an proyek at any time by typing in cancel or exit. (It would also be prudent to implement help in your production applications.)

In the second function of the menu dialog definition, you will notice a method on the session object called replaceDialog. Using this function replaces the current dialog with a new instance of the menu dialog, and this creates a loop. Looping will continue mengangsur the Done – Check Out menu item is selected. This allows the user to order as many items as they would like before checking out.

In the showReceipt dialog definition, there is another bot construct introduced—rich card attachments. Rich cards enhance the overall usability and aesthetic of a bot conversation. When using a channel that does titinada support a rich UI (such as with SMS), the Bot Framework will render a modified but reasonable experience to the user. The Receipt Card is one of eight currently available:

Running the pizza bot app in the Emulator

The pizza bot code that we developed is no longer using the ConsoleConnector. Instead, it is listening to messages being posted on the /api/messages endpoint of the local peladen. Start the bot on the terminal using:

Next, open the Bot Framework Emulator application. Enter the full endpoint URL and press the Connect button (you can leave the Connect form blank). The endpoint URL should be similar to the following:

Once the emulator is connected, send any text to the bot to initiate a conversation. Have fun experimenting and ordering pizza. Make consecutive orders and note how phone number and address information remains in the userData, yet the conversation-scoped data is cleared out after each order.

This article has focused on obtaining a foundation to build bots with the Azure Bot Builder SDK. Bots can be further enhanced by leveraging other Azure services, such as adding support for natural language with LUIS or adding image, speech or facial recognition AI with Cognitive Services. As you can see, bots definitely have the ability to provide self-service to your customers. (And quite frankly, a large number of people would rather not have to call in to a call center.)